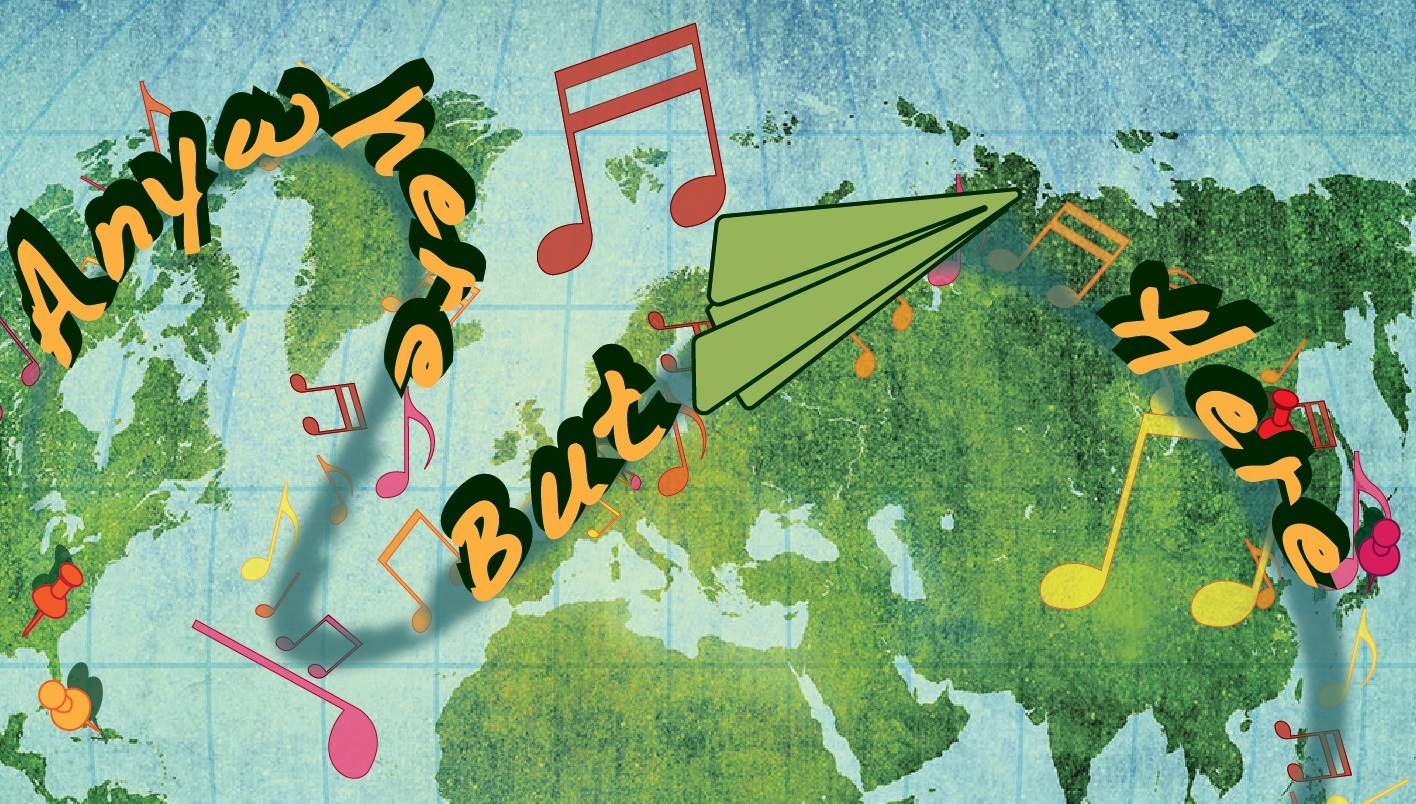 I am so excited to release my first solo album, Anywhere But Here! You can download the album for FREE or pay what you want on Bandcamp, or you can listen to it on Spotify, Apple Music, YouTube, Amazon Music, Google Play Music, or SoundCloud. Anywhere But Here will soon be available on all your other favorite online music platforms; just search for "Gabriel Mukobi."

Listen to Anywhere But Here

Anywhere But Here is also available on Spotify, Apple Music, YouTube, Amazon Music, Google Play Music, and SoundCloud. The album will soon be available on all your other favorite online music platforms; just search for "Gabriel Mukobi."

Anywhere But Here is a musical journey through 8 different cultures of the world. While incorporating numerous elements of these numerous cultures, the album also strongly draws from my own background in jazz, rock, funk, blues and more. This album is equal parts all over the place and always familiar, and there's something in here for everyone. Many thanks go to Alaya Mays for creating the amazing artwork!

I wrote, recorded, edited, mixed, and mastered the whole album myself over the course of the past year but only super seriously the last few months. It was a whole lot of work, but I'm very delighted with how it turned out and thrilled to share my music with you!

Cubata, the first song on the album, is a vacation to the salsa styles of the Caribbean. It is largely based on various Afro-Cuban musical motifs and styles, but it also incorporates some elements of rock.

Mchanganfu takes the listener to the Swahili region of eastern Africa. It draws from the Afrobeat styles from around the Continent as well as from popular and tradition music from Swahili countries.

Violet Sans Rouge (pronounced in French, something like "vee-oh-leh san rouzhe"), means "Purple without Red." Like its namesake indicates, it delves into some of the blues and jazz roots of New Orleans.

Balagan is my take on Klezmer, a musical tradition of the Ashkenazi Jews of Eastern Europe. It's a very light and bouncy yet grave and uptight piece, and some have described it to me as twisted carnival music.

Amorzão explores the swaying, melancholic Bossa Nova vibes of Brazil. A calming song at first, it later takes on rhythmic Samba music to culminate in an accelerating synth solo before slowly going to sleep at the end.

Swunky is a portmanteau of "swamp" and "funky." As such, it is a very grooving and funkalicious tune, but it's not afraid to get down and dirty. The song climaxes with two angry and nasty solos on organ and guitar before a 'choppin' ending.

Torschlusspanik is a very electrifying take on several genres including Europop, hip hop, dance, Eurohouse, and chillwave. The title from medieval German means "gate-closing-panic." Make of that what you will.

Komorebi dives into Japanese music with a title describing sunlight filtering through the leaves of trees. Komorebi transitions from a proper and reserved groove into a progressive and exploding trap drop with 3 rebellious solos.

I am an avid musician. I enjoy and participate in all aspects of the musical world, including playing and practicing multiple instruments, singing, songwriting, recording music, mixing and mastering songs, listening to music, and performing live for others’ listening enjoyment.

I enjoy exploring musical genres such as jazz, rock, blues, funk, shred, prog, pop, and various combinations of said genres. I certainly listen to music from each of those genres everyday, and as a result, the music that I write and play tends to end up in one way or another as a mashed up melting pot of them.

I tend to get bored with overly simple or overused progressions, chords, rhythms, and sounds, so I like to spice things up. Sometimes that can mean my music can get pretty out there. I also enjoy making good sounding music in a manner than no one else has done before, but that's not to say that you won't hear influences from jazz, fusion, funk, blues, rock, prog, and more.

Here is a section of the website where you can find demos of some of the songs I have written, recorded, and engineered. As many of these are demos, they can tend to be made rather hastily, there may be a few errors, and stuff might not sound quite like I would want it.

But that's not the point. They are just quickly manufactured ideas I wanted to get out of my head mainly just to share their musical content. If some of these are good, however, I am totally willing to go back, change a few things, re-record, and mix and master them until near perfection later. I hope you enjoy!